"Wellenlänge" - new work at Zimmermannhaus with images from Dorothea Lange.

I will show new work at Neue Musik Rümlingen. This year's festival is about the Swiss writer Robert Walser.

We are on tour with Pierce my Skin project! 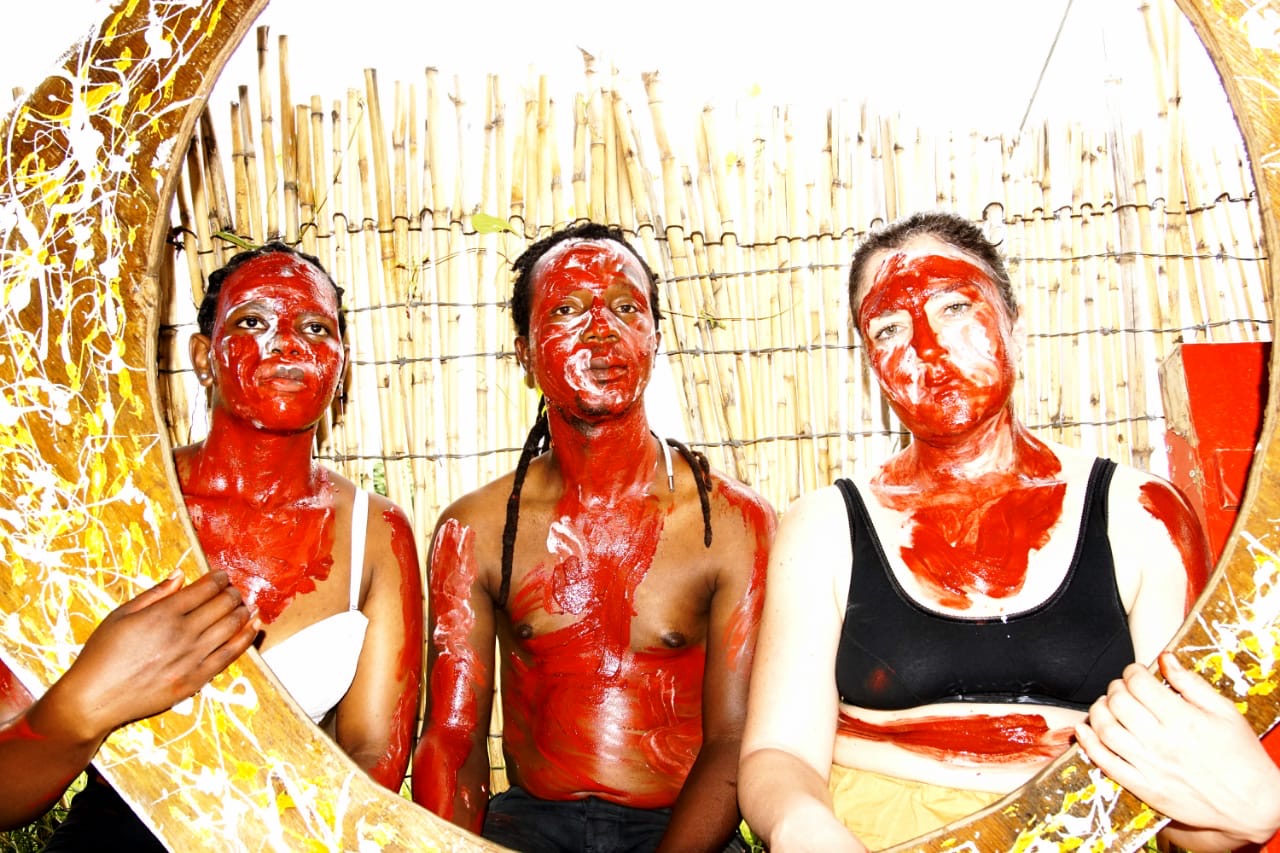 Ohr-Weide - Salix Aurita - our sound installation with 150 floating loudspeakers - is featured in the e-magazine eContact! 20.3 issue! 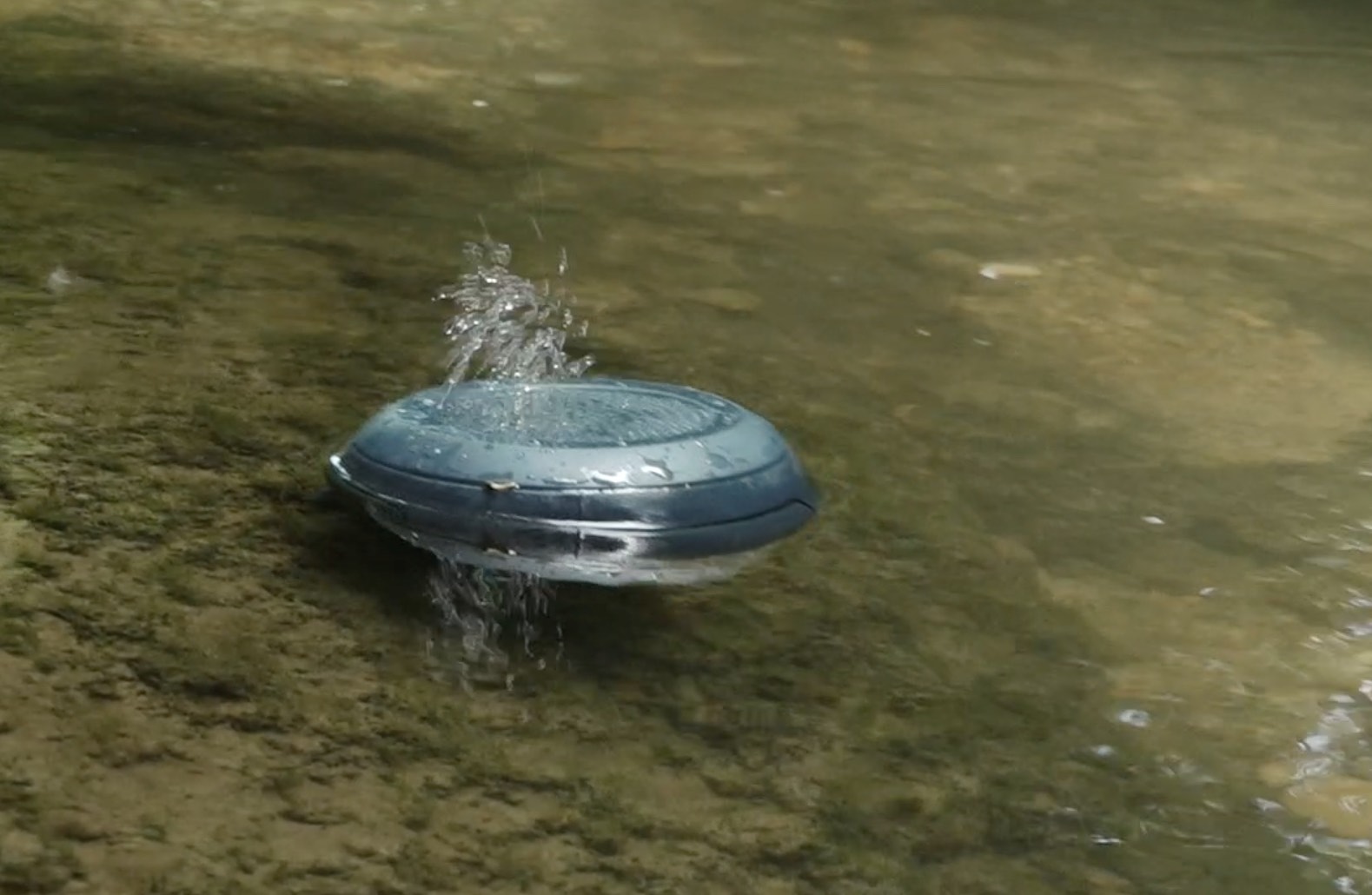 The Trailer of my short film
«Pierce my Skin» is now online!


A short montage of our performance in Tehran 2019 with the dancer Neda Notash is online now.

I am now a professor for electro acoustic composition and sound arts at Bern Arts University.💃🏼

I am working on new music during a month with Rah Art Residency.
Here is some first insight into my working process:

My new video work «Pierce my Skin» can be seen at Galerie Béatrice Brunner, along ArtStadtBern.

I am giving a talk about "Performative Sound Arts - impetus for communication" at the 'Bringing New Music to New Audiences' International Conference at the Music, Technology and Innovation Research Centre, De Montfort University in Leicester. This conference forms part of the 'Interfaces' Creative European project.

I am an artist in residence with Spazju Kreattiv in Gharb on Gozo, Malta. This happens in the framework of Valletta being the cultural capital of Europe in 2018.


A post about Ohr-Weide - Salix Aurita from Cathy van Eck on her Blog.

In collaboration with île flottante we will show Ohr-Weide - Salix Aurita at the anniversary of Merian Gardens in Basel.

I am giving a workshop about «Hardwarehacking and making music» at Bundesakademie für Kulturelle Bildung Wolfenbüttel.

My research trip to Lesotho will be supported by Pro Helvetia Johannesburg! Thank you so much!
I will be working on a project about Swiss participation and women's role in colonialism by following traces of a Swiss woman doctor born in 1903 who has lived in Lesotho for more than 30 years.


Video-Blog about my Residency in Cyprus in July 2017 and some video documentation from the performative experiment in the evening of 28 July 2017.

Residency in collaboration with the art department of the European University Cyprus. More in my Video-Blog.

A Workshop about the musicality of language and movement in a site-specific connection with «la tuilerie d'Orvin».

Our art facilitation project Stadtereignisse around the topics of «public space» and «temporary art forms» is taking place for the second time. More information on Stadtereignisse Aarau.

I am giving a workshop about «Hardwarehacking and making music» at Bundesakademie für Kulturelle Bildung Wolfenbüttel.

With Zoe Tsavdarides we are making a new piece for the performance night Discotheque at By Other Means Gallery in Upper Clapton, London.

I made the soundtrack for the video Ma Terre from Mounir Gouri and Islem Haouati during ARTifariti, International Art and Human Rights Meeting of Western Sahara.

I partake in the 10th edition "Después del Futuro / After the Future" of ARTifariti, International Art and Human Rights Meeting of Western Sahara, which will take place in the Sahrawi Art School in Wilaya of Bojador.
On this occasion, Countdown to Arabic will be shown in an online exhibition.

Documentation of my new piece réciproque now online.
Also, here is a great article from Louis d'Heudieres about my work.

I am performing running at Skilt Festival at Kunstgalerie in Progr Bern.

World premiere of a new piece for WEISSLICH at Hundred Years Gallery in London, UK.

A documentation of me performing with the voicetrument is screened at Chouftouhonna, the first international Feminist Art festival of Tunis.

Stadtereignisse, an education project about art in public space.

I am extremely happy to be awarded the Recognition award music 2015 by the Music committee of the Canton of Bern.

My work PAVILLON at the Final Show of MA Performance Making
at Goldsmiths University of London, UK

'Behind the smart world

I am participating in this Art lab about e-waste and its consequences in Linz, Austria. I am giving an artist talk in the evening of the 22 May.

Residency with iii at Studio Loos in The Hague, Holland
Thursday, 23 April 2015: running

I expose the voicetrument to a small gallery in eastern London.


An Interview of Cathy van Eck about my performance running

running - a performance by Lilian Beidler

Started the MA Performance Making at Goldsmiths University in London!

During three weeks the school bell in Bowil will be replaced by recordings of sound poems created by the pupils of all ages. Check: Sound installation school bell 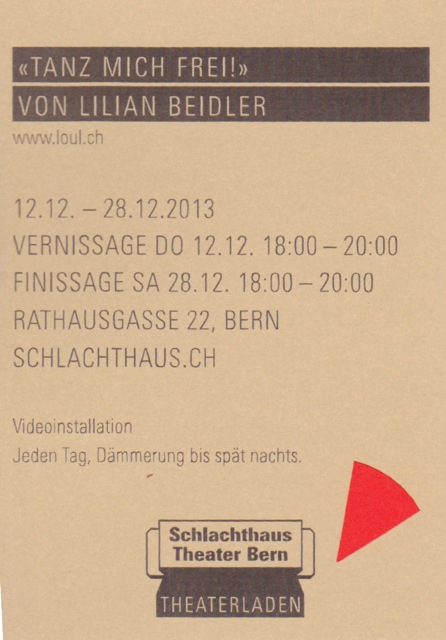 This solo show displays a new work I create for Theaterladen.

A revival of the original version from Panorama in 2011. In collaboration with île flottante | Nica Giuliani & Andrea Gsell with sound from Lilian Beidler

I perform running within a symposium with the topic "Participatory Objects and Everyday Spectacular", hosted by Columbus College of Art & Design (CCAD) where afterwards I will be giving an artist talk as well.

The City of Bern and the Canton of Bern support running and AOD Beijing with a finacial contribution. Thanks!

I play together with Shinya Murayama at Theater Spektakel in Zürich.

Performances and Sound Adventures with participating artists Erico Wakamatsu, Francesco Liberti and me perform on 3 July Saturdays. During the week you are welcome to visit the gallery as our open studio.

Exhibition and public working at Pantocrátor Gallery. I am looking forward to visitors!

INSIDE - OUT Art Museum in Beijing

I am there as an artist in residence during one month.

I am faculty member during the MFA exams of the Eastern Institute of Art, the project MFA in a Day by Noah Schenk

ART ON DEMAND action Beijing takes place in Haidian District, Beijing in collaboration with Noah Schenk (USA) and Wang Zi (China) and the support of INSIDE - OUT Art Museum.
AOD on Facebook

A la recherche du temps - I manage a project week on the issue of time and music with 113 kids of the kindergarten center Saint-Imier.

A radio feature about MUS-E with a report about "Experimentelles Hörspiel", the workshop I currently hold at a school in Brüttelen.

pfeif23 - the 23. whistle is being played during the radio show "Das weisse Lauschen".

Artist Residency Award I-Park: During one month I will be working on new ideas - alone or together with other residents. Looking very forward to it! Yepeee!

The City of Bern and the Canton of Bern support Schwarm each with Fr. 1000.-. Thanks a lot!

Panorama at Ausstellungsraum Klingental - The exhibition REALITY CHECK shows amongst other works a new video installation from île flottante with sound from Lilian Beidler.

A physical theater piece on the basis of the Giacometti sculpture "Le palais à quatre heures du matin" within the Master of Arts in Theater of Mercé de Rande at Scuola Dimitri in Verscio.
I play different musicalised media.

Make some noise! - I give a workshop about soundart.

per ënkyé, a folklo-experimental théâtre musical project of the solo performer Pascal Viglino at Theater Stok in Zurich and at petithéâtre sion in Sion

versaturum in motu - During one week I am working on a new composition at FFT! Accompanied by Georg Dietzler.

Fabriktheater of the Rote Fabrik in Zürich

Let's make up India! - a performance from Eva Maria Küpfer with music from Lilian Beidler

Acquisition of the Master of Arts in Contemporary Arts Practice

so föhn! within the group exhibition esquisses, a satellite exhibition of transmediale10

Art always happens in between.